Capturing the Terroir in the Bottle, in the Cyclades 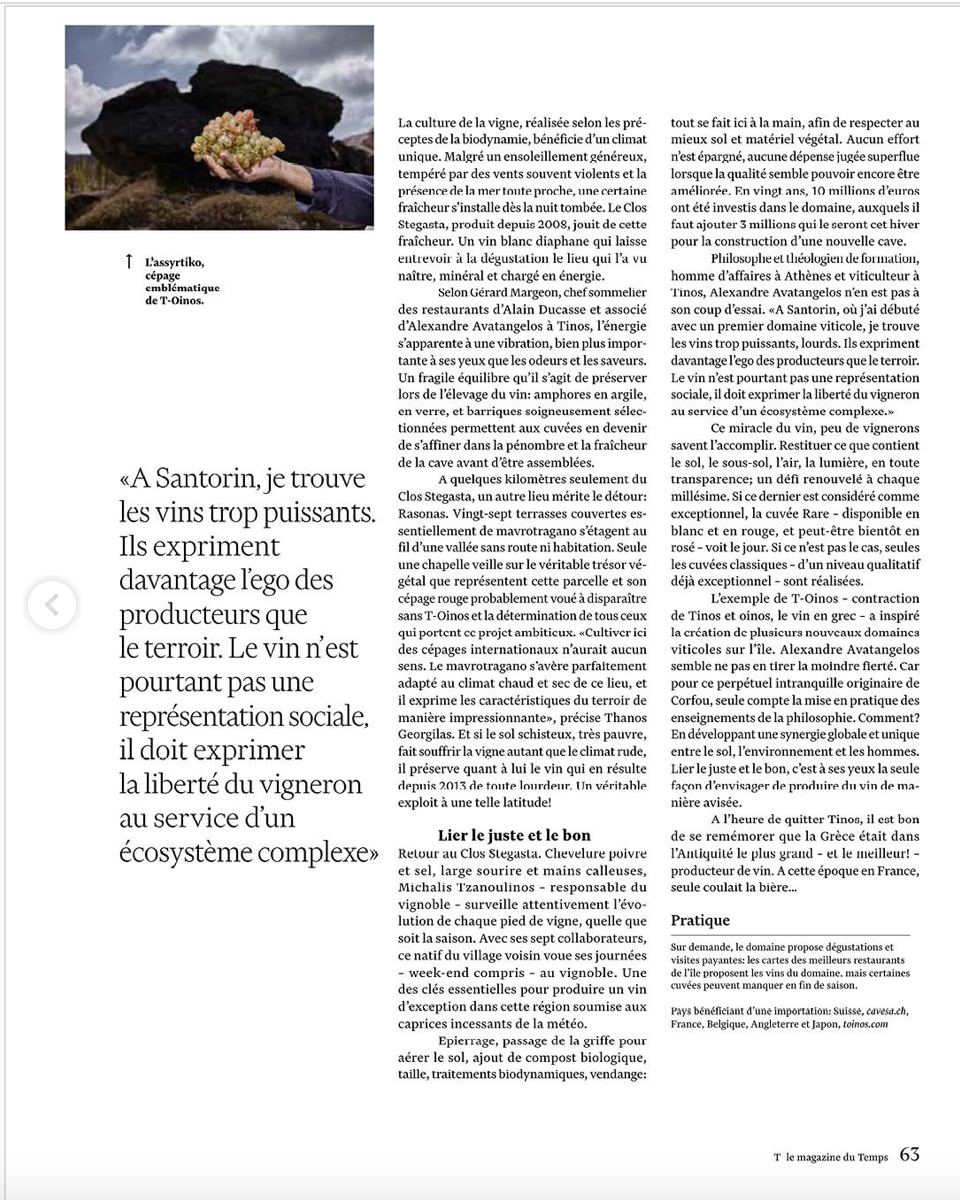 Capturing the Terroir in the Bottle, in the Cyclades

Sebastian Ladermann shares his impressions of the visit at T-OINOS with the readers of the  Swiss “Le Temps” magazine:

Producing exceptional wines in the heart of the Aegean Sea: this is the Homeric challenge taken up by Alexandre Avatangelos who followed, with ardor and without concession, a visionary intuition.

From the main port of Tinos, you must take a road that rises gently, winding for about fifteen kilometers. Not a vine on the horizon on this neighboring island of Mykonos and Andros, but countless terraces shaped by the hand of man to feed the Athenians in the past.

The landscape, aride in this beginning of autumn, unfolds its monochrome shades under an azure sky.

Past the village of Falatados, the panorama opens up, revealing a plateau swept by the winds. A place populated by a few herds of wild goats and dotted with such imposing monoliths there, 460 meters above sea level, where Alexandre Avatangelos decided in 2002 to replant vines, thus reconnecting with a wine-growing tradition that dates to Antiquity.

There is no need to have a particular sensitivity to feel the telluric force of the place. This landscape seems to come out of mythology. According to the  legend, gods and titans clashed there with granite boulders and great force.

These same blocks are now used in Clos Stegasta and its flagship grape variety, Assyrtiko. Thanos Georgilas, oenologist at T-Oinos, surveys the lines of vines whose fruits of the year – harvested by hand in several successive passages – have been dormant in the cellar for a few weeks already. With a density of 11500 vines per hectare, man constrains the plant deep into a granite soil covered with sand. This difficult terrain was gradually improved through cover crops – like barley – which made it easier for water and roots to penetrate through the rock.

“We don’t want to make wines, but rather bottle the terroir and the energy of this place”, explains Alexandre Avatangelos, founder of the project and owner of the estate. To do this, in 2016, he started his collaboration with Stéphane Derenoncourt, the famous wine consultant. rather than imprinting a personal style to the detriment of the expression of the place, he put all his expertise at the service of the terroir ever since the beginning of the project in Tinos. An approach which is as humble as it is respectful finding its full meaning here.

The cultivation of the Vine, carried out based on biodynamic principles, benefits from a unique climate. Despite the generous sunshine, tempered by often violent winds and the presence of the nearby sea, a certain coolness sets in as soon as night falls. Le Clos produced since 2008, enjoys this freshness. A diaphanous white wine that leaves a glimpse of the place where it was born, mineral and loaded with energy.

According to Gérard Margeon, Chef Sommelier of Alain Ducasse’s restaurants and partner of Alexandre Avatangelos in Tinos, energy is like a vibration, much more important in his eyes than smells and flavors. A fragile balance that must be preserved during the aging of the wine: amphorae in clay, in glass, and carefully toned barrels allow the cuvées produced to mature in the darkness and the freshness of the cellar before they are blended.

Only a few kilometers from Clos Stegasta, another place worths the detour: Rasonas. Twenty-seven terraces mainly of mavrotragano are staged over a valley without road or habitation. Only a chapel watches over the veritable plant treasure represented by this plot and its red grape variety, which was probably doomed to disappear without T-Oinos and the determination of all those who carry out this ambitious project. •Growing international grape varieties here would make no sense. Mavrotragano proves to be perfectly adapted to the hot and dry climate of this place, and it expresses the characteristics of the terroir in an impressive way, notes Thanos Georgilas. And if the very poor schist soil makes the vines suffer as much as the harsh climate, it preserves the resulting wine produced with all its strength since 2013. A real achievement at such a place!

Link the right and the good

Return to Clos Stegasta. Salt and pepper hair, broad smile and calloused hands, Michalis Tzanoulinos – vineyard manager – carefully monitors the development of each vine, whatever the season. With his seven collaborators, this native of the neighboring village dedicates his days – weekends included – to the vineyard. One of the essential keys to producing an exceptional wine in this region subject to the incessant vagaries of the weather.

Destoning, clawing to aerate the soil, addition of organic compost, pruning, biodynamic treatments, harvesting: everything is done by hand here, in order to best respect the soil and plant material. No effort spared; no expense deemed superfluous when the quality seems to still be able to be improved. In twenty years, 10 million euros have been invested in the estate, to which must be added 3 million which will be invested this winter for the construction of a new winery.

Educated philosopher and theologist, businessman in Athens and winegrower in Tinos, this is not the first attempt for Alexandre Avatangelos. “In Santorini, where I started with my first wine estate, I find the wines too powerful, heavy. They express the producers’ ego more than the terroir. Wine is not, however, a social representation, it must express the freedom of the winemaker to the service of a complex ecosystem».

This miracle of wine, few winegrowers know how to accomplish it. Restore what contains the soil, the subsoil,the air, the light, in all transparency, a renewed challenge with each vintage. If the latter is considered exceptional, the Rare cuvée – available in white and red, and perhaps soon in rosé – is born. If this is not the case, only the classic cuvées – of an already exceptional quality level – are made.

The example of T-Oinos – contraction of Tinos and Oinos, the word for Wine in Greek – inspired the creation of several wineries on the island. Alexandre Avatangelos does not seem to take the slightest pride in it. Because for this perpetual restless native of Corfu, only the practical application of the teachings of philosophy counts. How? By developing a global and unique synergy between the soil, the environment and people. To bind the just and the good, it is in his eyes the only way to produce wine in a wise manner. When ready to leave Tinos, it is good to remember that Greece was in antiquity the greatest – and the best! wine producer. At that time in France, only beer flowed.

The estate offers tastings and paid visits upon request; the menus of the best restaurants on the island offer wines from the estate, but some cuvées may be lacking at the end of the season.